(Yippee, I was waiting for this doll announcement!) 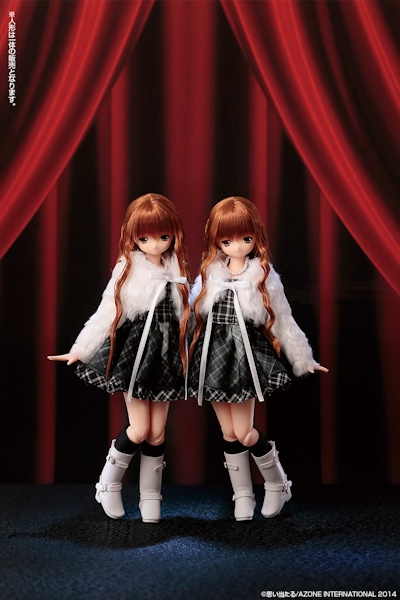 Azone is going to release the two angelic girls named Lien Angelic Sigh II, who will be part of the EX Cute Best Selection.

What is EX Cute Best Selection?

To celebrate 10 amazing years of the EX Cute line, Azone has asked the fans to select their favorite previously released EX Cute doll.

The most popular doll will be remade to look as close as the original.

But rather than just re-releasing the original doll, Azone will also offer a totally different version to go along side the original’s 2nd release. (Example: If the initial doll had a closed mouth than the look a like doll will have an open mouth)

Lien was originally released in October 2007. Click here to view this beauty from back then.

What’s the difference between the two Liens?

Take a look at their mouths.

The other Lien has her lips turned up (on the right)

Shops in japan will begin accepting pre-orders June 2 through June 30, 2014.

You can purchase either Lien, or both, since neither doll is a limited Azone direct shop version. 🙂

Go to eBay to order this cutie!

Oh and her outfit is pretty cute too :p