This doll is part of the Beary Fairy series which was released May 2012 and included Pullip Kiyomi, Dal Dalcomi, Byul Secomi and now the latest addition of Isul Gosomi! (I’m assuming they will release a Taeyang to complete the series??)

I honestly wonder what was Groove thinking, I mean really two years, if that’s the case maybe they will go ahead and release the whole Barbara line up (those dolls are starting to grow on me. At first I really disliked them xD)

This cuddly guy is scheduled to be release June 2014. (What happened to May? Only 1 Pullip release in the month of May?) 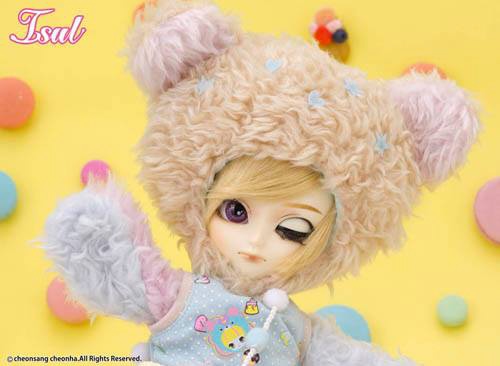 Omgosh guys you don’t know how happy I am to see another Pullip family member announcement besides a Pullip.

I was getting really worried for a second there lol. (You can read my whole rant on the subject matter here, it’s in the comment section)

Do you know the name of the last 2014 Isul doll and what month he was released?

Isul may not be the most masculine guy when compared to the Taeyangs and add this latest release to the mix and you got yourself a recipe . . . a recipe for what, I don’t know, but yeah I’m just gonna stop talking >_>

I guess what I’m trying to say, is that this release is really cute and Kawaii but I still can’t help but to think; Why?

Product Information
Price: ¥15,000 about $147
Release Date: June 2014
Limited: No
What do you think about this little bear who goes by the name Gosomi? What do like or dislike about this doll? Leave me a comment below! 🙂