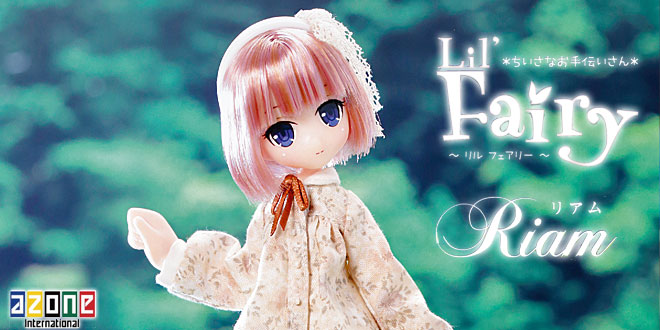 June 2016, Azone International will release the 2nd Lil’ Fairy Riam, The Edge of Hope (or Edge of the Banks).

You may recall seeing Riam at Doll Show Asakusa 1 along with her friend Neilly who will be coming our way July 2016.

I know there were several fans who either fell asleep on Riam’s 1st release or they passed on her for Lil’ Fairy Neilly.

These same fans severally kicked themselves for not ordering her when they had the chance and if you’ve haven’t caught on yet I’m talking about myself.

When Riam was announced I could only get one of the Lil’ Fairies and I opted for Neilly.

Once I got Neilly home, I began imagining how much fun it would be to have both Neilly & Riam in my doll family but by that time; the original Riam was waaay out of my budget (see her here on eBay).

So I highly recommend you do not snooze on the 2nd series of Riam.

I imagine many are going to rush to pre-order her and if you don’t keep your eyes on this sweet prize, you’re collection will once again be missing the lovely Lil’ Fairy Riam 🙁

What I love about Riam is her face (how did I miss that angelic face the first time around) so honest & innocent and I’m gushing over her beautiful stylish hair color. OMG!

Lil’ Fairy Riam, The Edge of Hope is tempting me and if I wasn’t already committed to the Sahra’s a la mode girls for June I would snatch up Riam in a blink of eye but what about you?

Are you anxious for June 3, 2016 to arrive or will you pass on Riam for Neilly who isn’t too far behind?

Will Lil’ Riam be your first Lil’ Fairy or do you already have the Purimyure Fairy Association student body in your collection?

Share your thoughts below. I look forward to chatting with you 🙂