Brace yourself Pullip doll loving fans! May 2012 will be turning into October 31 with the release of Isul Midnight Deja Vu!

We can expect to see tons of gorgeous Pullip dolls in the month of May. It makes me wonder, what else does Groove Inc have in store for us for the remainder of the year.

I’m very impressed with this little guy and can’t wait another month for him. Just his name sounds so awesome and mysterious. 😉

This doll will be part of the Snow White Princess Series.

I don’t know where to begin with him, I’m at a lost for words, speechless! <3

I mean Deja Vu is so so very elaborate, they put a lot of work into him and it looks like it paid off, at least in my books it did. 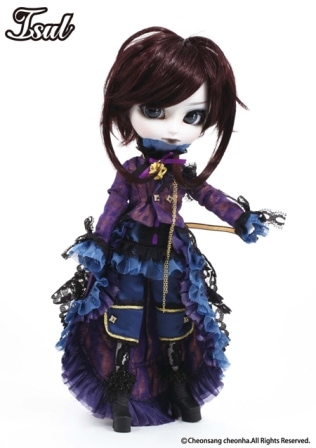 His pitch black eyes are scary and deeply dark against his pale white skin. Move down his face and you see that he is wearing black lipstick. The brownish-purple color of his hair compliments his outfit very nicely as they too have purple and blue undertones.

My favorite part about him is his long jacket! I’ve never seen a guys jacket so decked out with so much detail before. The black lace along his coat is outstanding and the golden bow is the icing on the cake!

Midnight Deja Vu’s Saying:
See you anymore, you should know the sweet taste of…. such dense Reach out your hand Come on forbidden fruit shine into the darkness of the black

So tell me what do you think about Isul Midnight Deja Vu, post your thoughts below!