Man you never know what to expect from Groove Inc, they keep things very interesting and fun!

You can add him to your home by going to eBay.

From research I gathered the show Black Jack once was, and I’m pretty sure still is a very popular manga/anime series.  Can you believe the manga started in 1973?!

The creator of Black Jack is Osamu Tezuka. Two other shows that he did, that you maybe aware of are Astro Boy and Kimba the White Lion. 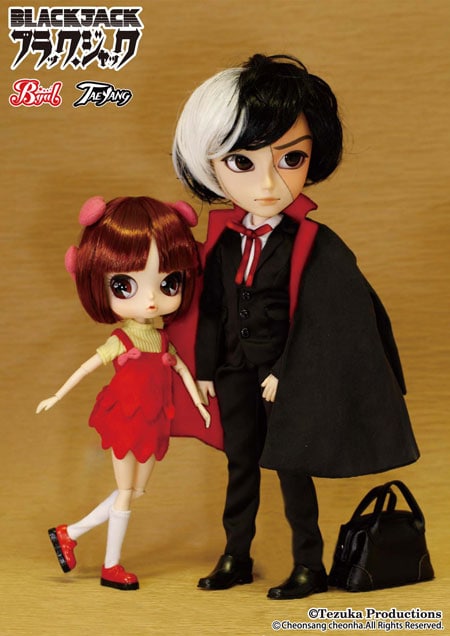 Okay so enough background history, lets talk about this Doll! 🙂

This doll is incredible and kooky. Since I read up on the Black Jack character I’ve became even more drawn to this doll.

Even before I knew anything about the character I just fell in LOVE with him. The style reminds me a bit of the Taeyang Edward Scissor Hands .

I was so excited too, but than once I got a good look at him & I saw the stitches on his poor face. 🙁

The person next to him is the Byul doll as his sidekick Pinoko.

Please be sure to leave your thoughts and comments below about the doll! 🙂

Black Jack is a medical mercenary, selling his skills to the highest bidder. He is a shadowy figure, with a black cape, eerie black-and-white hair, and stitched-up scars worming all over his body with the most prominent being across his face. Black Jack cures patients indiscriminately, from common folk, to presidents, to yakuza leaders, though he charges all of his patients absurdly high sums.