You are here: Home / Groove Inc / There Was Myra, Now There Is Pullip Aira April 2014

Oh Groove because something was popular doesn’t necessarily mean you have to release a recolored version let a lone increase the limited release quantity by 200!

Go to eBay to order this fabulous dancer! 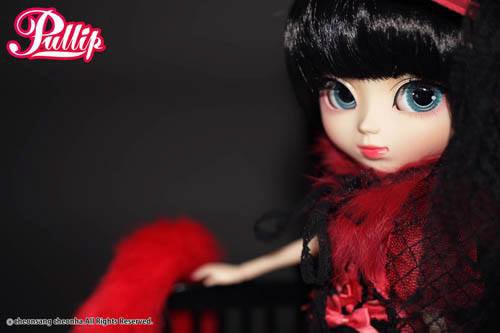 Aira is an edgy version of the September 2013 release Pullip Myra who is seen wearing a dominate black and red color scheme as opposed to the soft and frilly pink and black color combo Myra was sporting.

I like to think of Aira as a “hybrid doll” she has qualities of Myra (obviously :p) but has a mix of a sexy magician by the name of Pullip Kuhn. (has to be the red and black colors)

I’m not a prude in any form, but in all honesty, I’m having a difficult time seeing Pullip AGAIN (let alone any doll) walking a round with nothing but bra and panties.

In 2003 I thought Pullip was established as a fashionista

In 2014 I’m lost as to what her purpose and ambitions are.

Is she still a teenager or has she evolved to an adult now, just give me a story Groove?!?

Sexy dolls that appeal to a certain audience.

Which version do you prefer and what do you think about this latest doll? Write your thoughts and opinions below! 🙂